Written by Colin Little
Updated over a week ago

This document is intended to walk you through the steps of how to setup Automation Rules in Naverisk to help automate Service Desk tasks based on incoming Tickets.

1.0 How to Setup an Automation Rule

The first area of the Automation Rule setup is where you can give you Rule a Name and Description. This area also lets send an email or create a Ticket to let you know when the Job processes a Ticket.

Please not the Enabled button, ensure you check this when you are finished creating the Rule otherwise it will not run.

In this area, you will see usual Ticket fields such as SLA Class, Ticket Category etc. This will be used by the Automation Rule to determine if this Ticket should be processed by the Rule.

For example, (in the below picture), a Ticket from Client Artificial Construction with SLA Class set to Failure and associated to Device Name NAVCS2 should be processed by this Rule. However, the other criteria set to “ANY” will not be considered by the Automation Rule.

From the Actions tab, you can choose what the Automation Rule can do when it finds a matching ticket from the criteria.

Most of the actions are Device-specific, so you either have to:

In most common scenarios, you will be using the Apply to Ticket Devices option.

This option will enable the system to run a script pack whenever a ticket match is successful.

Much like a Scheduled Job, Automation Rules can put a device into Maintenance Mode, so should a certain ticket be created in the system, Naverisk can automatically place the device into a suspended state where it will no longer generate tickets based on the options used:

This option is best used with the Target Device: Use the Device Filter options set instead of the Apply to Ticket Devices, If used in conjunction with email integration this will enable Automation Rules to restart a device via an email request.

Automation Rules can also Start/Restart/Stop windows services. This can be used in conjunction with Device Roles to detect when services are running and generate a ticket for Automation Rules to match on, which stops the service. Or alternatively, to have Automation Rules attempt to start back up a failed service.

When used with Email Integration, this can provide your end users the ability to email through a request for a report, and have Naverisk automatically generate the report and email it to a preassigned email address.

This option provides several ways to change the matching ticket, such as assigning an Email Integration Ticket to a specific Device or automatically assigning tickets to an After Hours technician.

This will generate a pop up box on the selected Device containing the assigned message.

This will enable the system to perform a Software, Hardware or Operating System scan using an Automation Rule. Get up to the minute information from your Devices when you want it, automatically.

Naverisk now comes with the option of specifying another Automation Rule to immediately follow after the current Rule completes. Imagine a scenario of automatically assigning the ticket to an After Hours Technician.

Then immediately followed up by another Automation Rule to send out an email notification. Then another rule to place the device into Maintenance Mode, until the Technician has dealt with it.

Here you can configure the automated task to deduct hours and/or charge an amount for the service undertaken by the Automation Rule.

In this section you can specify what time periods or days the Automation Rule should process the Tickets.

Please Note: You can specify a Start time and End time for when the rule should be processed. This time is specific to the Time Zone of the client of the logged in user.

The Audit tab will show what changes have been made to the Automation Rule since it was first created, information about who created this rule and important dates like when it was last modified. There are no configurable options on this tab.

The Log tab will show a list of all Tickets have been processed and actioned by the Automation Rules. There are no configurable options on this tab.

Automation Rules do not follow the same setup as a Scheduled Job. Where scheduled Jobs need to be setup on each client individually, Automation Rules are created at a Global Level. This means that when a user logs into Naverisk, they are able to create Automation Rules to process Tickets matching their clients and all sub clients.

Naverisk will automatically try and clean a device that raises a Disk Space alert, as sometimes disk space can be freed up by simply clearing the temp folder, or the browser cache etc. This can be done by using the Ticket Trigger Text that the Disk Space Ticket uses.

By using the Trigger "has raised DiskSpace", and setting the SLA status to Warning, Naverisk will only attempt this against warning Tickets for DiskSpace, which is usually the first Ticket created.

To set this up:

The General tab of the Automation Rule will look like the below image: 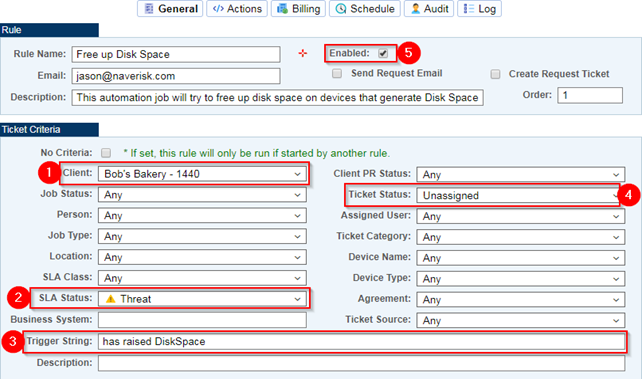 In the Actions tab: 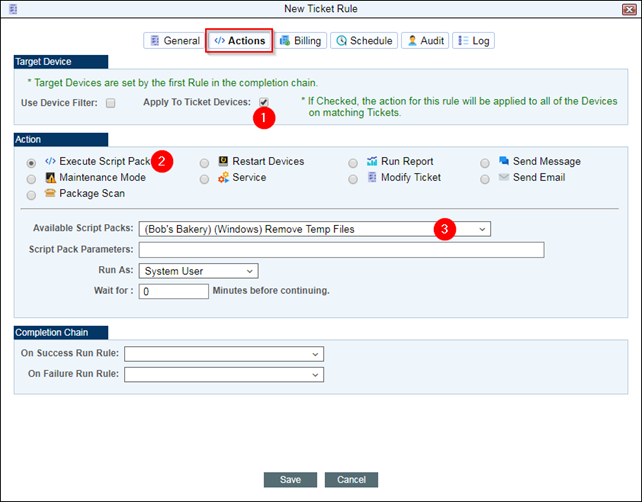 This Job needs  to be run for every Disk Space Warning Ticket, so it is not required to set a Schedule. The Rule can be saved.
The Log tab will show when the Automation Rule successfully runs.

From the above picture, the Automation Rule successful detected a disk space issues and ran the Script Pack against it.

Did this answer your question?